The Shadow of What was Lost by James Islington 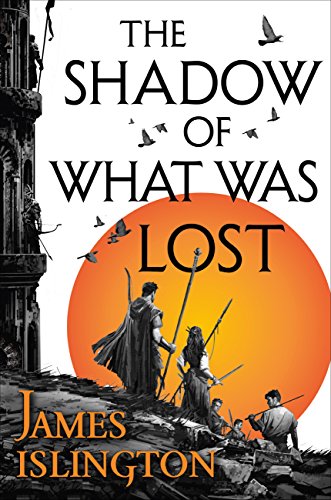 “As destiny calls, a journey begins…

It has been twenty years since the godlike Augurs were overthrown and killed. Now, those who once served them – the Gifted – are spared only because they have accepted the rebellion’s Four Tenets, vastly limiting their own powers.

As a gifted, Davian suffers the consequences of a war lost before he was even born. He and others like him are despised. But when Davian discover he wields the forbidden power of the Augurs, he sets into motion a chain of events that will change everything.

To the west, a young man whose fate is intertwined with Davian’s, wakes up in the forest covered in blood and with no memory of who he is…

And in the far north, an ancient enemy long thought defeated begins to stir.”

This is an epic fantasy written with a masterful panache with a flavour of Robert Jordan about it. It has a vast history, a broad geography, and a great map – always a plus as far as I am concerned. The prologue is a taster of  some of the history, one which certainly intrigued me.

The Augurs were fabulously powerful and were served by those with lesser powers of a different nature known as the Gifted. Long before this story begins, the Augurs were overthrown and annihilated by a rebellion of the non-gifted, and the surviving Gifted were forced into living with their powers very much curtailed. All the Gifted are marked with a naturally occurring brand when that Gift first manifests within them. These youngsters are then sent to learn how to use their Gift at various colleges around the land of Andarra. Now, a new army rises from the north, strange people with stranger powers proliferate.

This is a multi-POV story, essentially following three protagonists Davian, Wirr and Asha, but many other characters fill the narrative with interest and colour. The three youngsters attend a college where they learn how to use their magical powers, within the constraints of the Tenets. Unfortunately, apart from his brand indicating the Gift must have manifested, Davian cannot seem to access it.  A stranger sends him off on an errand to discover why the Boundary – a magical construct lying between the lands of Talan Gol and the south, which holds back the remains of the Augurs’ ancient powers in the form of monsters and followers – is failing and how to mend it. He is accompanied by his friend Wirr. Asha loses everything, we journey with her to a new life where she must learn a new way of being. The fourth main player, who wakes with no knowledge of who he is, though named him Caeden by villagers in the place where he woke, joins Wirr and Davian on their journey to the Boundary. Caeden must discover who he is and what the link between him and an artifact that Daeven carries is. He is beset by many visions of a past, but not a past that he can remember. In one he is told:

“We each have our temptations, Tal’kamar. We each have our own battles that must be fought. But you must fight them, my friend. You cannot hide from them. Otherwise you will never be more than you are.”

And Caeden knows he needs to be very much more than he is now to survive, let alone succeed in doing what he must – even though he has no idea what that might be.

I like that this world is one where magic and its bearers are detested and controlled by those with none – that the all-powerful ones were overthrown long ago. I like that there are different types of magic, there’s a nice section explaining how the two types are different and how they work – how it is the Essence that powers the Gift – yet it is not in the traditional college/school setting that this is learned. The characters are believable and strong, many characters are not what they seem, some have powers that could get them killed, some situations are not what they as straightforward as the reader might suspect, there are lots of twists, red-herrings, shadowy flashbacks and fore-shadowings – and I love them all.

I am very much looking forward to reading the second book in the Licanius trilogy.